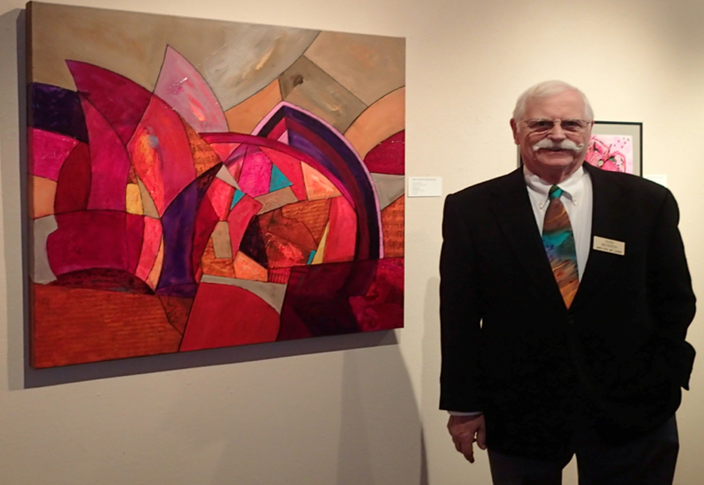 
I was born in Duesseldorf, Germany, and came to the United States in 1954.  I pursued a career in business until 1965 when I returned to academic studies and received my Ph.D. in Audiology at Wayne State University Medical School, Detroit, in 1974.

I became interested in abstract painting when I learned of the first Eva Briggs Abstract Art Competition to be held in 2005. Not bound by realism, I began to paint in terms of color, values, shapes, and line.  The ultimate rewards came when all three of my first abstract paintings submitted were among the Best of the Briggs destined for the Rogoway gallery in Tubac, AZ. Likewise, my entries to the Briggs were among the top 24 selected by judges of the show in the years, 2005 to 2009, 2012, 2013, 2015 to 2020, and 2022. I have successfully participated in the Open-Studio Tours of the Tubac Center of the Arts (TCA) since 2009 and was invited to present in the University of Arizona Museum of Art's (UAMA) Fresh Paint project celebrating Southern Arizona's artistic talent in 2011 and 2013. 2023 marked the eleventh consecutive admission of my entries into the Aqueous Show at the Tubac Center of the Arts, a national juried competition in water media.  My work has been accepted into the Juried Member Show at TCA in 2014, 2015, 2016, 2017, 2018, 2020, and 2021. I was awarded second place at the Community and Performance Art Center (CPAC) Jumping to New Heights Art Exhibition in 2013 and won first place at CPAC's Art of Re-cycle in 2014 and an honorable mention at this show in 2015 and 2016. I was juried into the Tubac Center of the Arts "19" Exhibit in 2017.

Some of my work is currently exhibited at Framewerx in Winter Park, Colorado. Interested clients may contact the artist at his studio/gallery:
﻿